Frances has HIV and Kaposi’s Sarcoma. When Frances became ill, her husband abandoned her and their 3 children. Frances is a subsistence farmer and even though she is very ill she must still work in her field to feed her family.

One day care day, Frances had cycled from her home to Ndi Moyo with her two youngest children on her swollen, weeping feet. Ndi Moyo saw how badly Frances’ condition had deteriorated and took the family home by ambulance. The next day Ndi Moyo staff made a home visit to see how the family were doing. They found Frances too ill to move, on the floor of her house. Her baby Jenny was lying beside her with no-one able to care for her.

Ndi Moyo took Frances to hospital where she was admitted. The day that Frances was discharged, Ndi Moyo followed up with a visit to her home. She had already taken her baby on her back and gone into town to buy fertiliser so that she could continue to feed her family. Frances’s cancer was so bad that she needed to have treatment even though this meant that she must stop breastfeeding. Ndi Moyo provided Frances with vincrisitine chemotherapy.

We also supplied Frances with formula and helped her learn how to feed Jenny. As Frances’s condition worsened, so did Jenny’s. The baby developed diarrhoea. This is a common problem associated with being cup or bottle-fed in communities with poor sanitation. Jenny was a crying, unhappy baby. One month later, at day care, Jenny herself was taken ill at Ndi Moyo with a high fever. 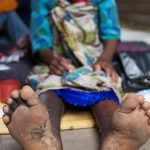 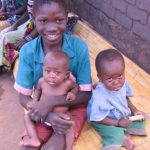 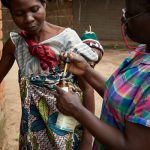 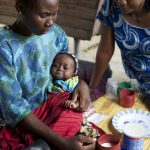 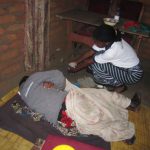 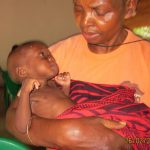 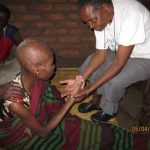 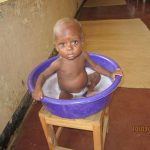 Ndi Moyo took Jenny to hospital where she was admitted with severe malnutrition. In Malawi hospitals, patients need to have their own carers who can cook and nurse them. Frances and Jenny stayed together at Salima District hospital and Ndi Moyo visited them on our hospital rounds and also made additional visits. Sadly, Frances was too ill herself to care properly for Jenny. Ndi Moyo was very concerned for them both. When Jenny was discharged from hospital, one of Ndi Moyo’s volunteers, a retired paediatric nurse based in Salima, took Jenny home for a few days to care for her.

Frances had become so depressed that she stopped taking her ARV medication which sustained her immunity. She also stopped eating. Ndi Moyo visited Frances daily to feed her with liquid food. They also help Frances to make arrangements for the care of her children. Frances chose a cousin to look after Jenny, and another relative for her two young sons.

Frances had given up all hope but one day, Ndi Moyo’s driver, Manuel, talked to her. Manuel is also an Ndi Moyo patient but through Ndi Moyo’s care and regular ARV therapy, Manuel is able to work and have a normal life. Frances was finally persuaded to take her ARVs. The next day when Ndi Moyo visited they were delighted to find Frances had rallied and was sitting outside eating porridge.

In April, 2013, Frances died. Ndi Moyo attended her funeral and continues to support her 3 orphaned children. A local couple sponsor Jenny so that she has enough nappies and formula. Darcy and his brother still see their sister and they are all frequently visited by Ndi Moyo.

Frances’ sad story shows the many ways in which Ndi Moyo helps people by according them dignity and compassion, and medical and practical help. Our holistic care spans all aspects of our patient’s lives from on-going clinical care and counselling, to vital transport to and from hospital, emotional and financial care for the family including dependent and orphaned children, going on into bereavement.